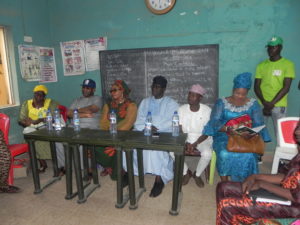 As general elections is around the corner, several political parties and candidates are taken their political campaign to the grassroot. Consequently, the candidates of African Democratic Congress (ADC) visited Matogbun to interact with the people and to sell their manifesto to them. The candidates in attendance are Rt Hon Titi Oseni Gomez, Ogun Central Senatorial Candidate; Hon Johnson Fatoki, Ifo/Ewekoro Federal House of Representatives Candidate as well as Hon Michael (MKO), Ogun State House of Assembly, Ifo Constituency II Candidate.

Otunba Olusanya while addressing the candidates said “When you are talking about constituency II, we have the highest population, if we go by the by last census carried out in this area and when you look at it again, when they say Ibo (vote), the Ibo is actually here. So we are about been at the forefront even though we much much relegated to the back because of lack of infrastructural development in this area, but that’s not withstanding, we have also taken the horn by the bulls by saying that enough is enough. We cannot continue to do things the same way and expect to have different answer and that was why we came up with Oke Odo Political Movement and ever since then, we have been sensitizing our people about politics and we have been telling them that if you say you are not going to join politics, we will always have the wrong people there and that’s the truth.

“So, I have told them how to participate fully, actively, not only registering to be a member but to also be a delegate. You have to work hard to be a delegate in whatever party you want to belong to. We have the right and chance to support anybody and that’s the truth. 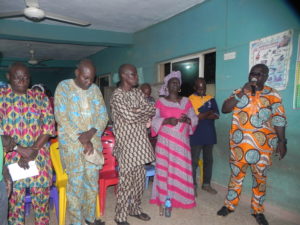 “We are here because we know the important of people of the community and to solicite for your support and votes. Matogbun is very important to us, we hold her in a high esteem because of the personalities here and that’s why we are speaking English. There are some places that we can’t speak English because of the caliber of people there and we promise that we will make you proud.”

Fatoki also highlight some of his achievements as a former Chairman, House Committee on Education, Ogun State House of Assembly. “When I was the Chairman, House Committee On Education, I used my influence to gave employment to nothing less than 66 teachers in my constituency, minimum of 9 bore holes were also provided to the constituency of 5 wards, with generating sets, which are still working till date.”

Rt Hon Titi Oseni Gomez in her respond said “This community is very important to us and that is why we make sure that we are here.” She then urged the people to cast their vote for her political party come February 16th and March 2nd. She also enlightened the people on how to cast their vote properly in order to avoid vote wastage. She also highlighted her contribution to her constituency as a former member of Ogun State House of Assembly such as building of town halls, bore holes, construction of road, transformers, water, schools, police post, employment opportunities and empowerment.

“Our party major concern is road and we promise to hand over the road projects to MKO because it’s a state road but we will always support him. Our government will also return local government autonomy, she added.” 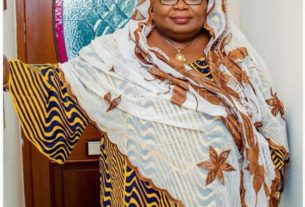