Friends, associates and sympathizers are trooping to Adiyan Alausa Town to sympathise with the family and indigenes of Adiyan Alausa Town on the demise of their Baale, High Chief Shuaib Akanni Mogaji who passed on in Sunday, 10th of March, 2019 after brief illness. Prominent personalities within and outside the community are not left behind as they also pay their condolence visit to the family of the deceased; which include Prince Adebanjo G. B, Ifo CDC Zonal Chairman, Rev. Adesola, Chairman, Adiyan Alausa Area CDC, Baale of various neighboring towns such as Baale of Matogbun, Koye, Ekun, among others.

Mrs Tawa Mogaji, the 2nd and youngest wife of the deceased in an interaction with our correspondent, described her late husband as a caring, loving and kind hearted person adding that he always encourage all his subjects to participate In community development activities. She said the people will surely miss him but pray that may God provide them another good Baale like her husband.

The 1st and eldest wife of the deceased, Mrs Taibat Mogaji also buttress the assertion of her younger wife, Tawa Mogaji, adding that their husband was a nice and peaceful person. She then prayed that the community will continue to be peaceful after their husband demise and urged the council in particular and the town in general not to forsake them and their children.

The Otun Baale of Adiyan Alausa, AbdulRaheem Danasungbo also described the late Baale as a good father to all and sundry, adding that if you offend the Baale, he will call you and tell. He also said councils of the Baale had cordial relationship with him.

The Balogun Adiyan Alausa, Chief AbdulRafiu Sulaimon Babalola described the late Baale as a professional boxer that didn’t suffer any defeat through out his boxing career, a well exposed man that travel far and wide before occupying the throne after the demise of his predecessor, High Chief Adam Babalola who joined his ancestors in 2003.

“He was a respected political leader that many top politicians consult for advice until his demise. He was a contented human being that accept whatever that comes to him as he don’t involve in dubious act and he had cordial relationship with the CDC and CDA, Babalola added.”

Adiyan Alausa Area CDC chairman, Rev (Dr) Adesola said “His demise is a great loss, not only to his family but to the entire community because since his emergence about 10 years or 11 years ago, peace has reign very well in the community. He embraced community development and show his very loyal and commitment to the involvement of CDA. Is only because of his position, he even wish to be attending CDA meeting. There is hardly any Area CDC that will be hosted by the Adiyan Alausa Group in that hall that he will not attend, even outside Adiyan Alausa Group.

“He attend all over the Area CDC, if invited to the extend that he prevail on the Baale and Council of Adiyan Alausa to release 2 plots of land to the Area CDC for the purpose of building police station at Araromi there. It really a great loss because at 85, he is a source of encouragement to us but well, God will not leave us.”

Adesola also admonished the residents and indigenes to emulate the life of the late Baale. “The residents and indigenes should emulate the life of Baba Shuaib Mogaji and build on his legacy of love, loyalty and commitment to community development. You know, at times when we are hosting CDA meeting, he will open the hall, he will call somebody as old as he is to come and arrange the chairs, he will call the wife to come and sweep the floor. So people should just emulate him and should not allow these legacies to die with him, to continue to show commitment to community development and express similar cooperation to whosoever that will ascend the throne after him.”

The late Baale, High Chief Shuaib Akanni Mogaji was born on April 8th, 1933. He was enthroned as Baale of Adiyan Alausa on 23rd of December, 2006 and died on 10th of March, 2019, he was buried same day according to Islamic rites. He was survived by 2 wives, children and grandchildren. 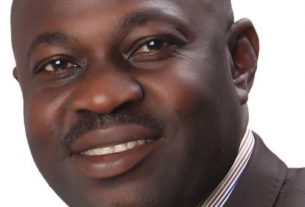 Gov. Abiodun know your plight, be patient with him – FFS 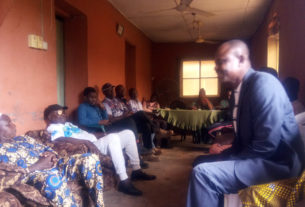