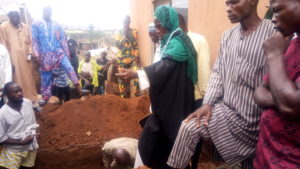 Matogbun residents was shocked as they receive the news of the death of Mrs Fatimoh Awwal Sekoni, the wife of a prominet indigene of Matogbun and a chieftain of Allied Peoples Movement (APM), Alhaji Sekoni.

Many residents came out in their large numbers to pay the deceased, who passed away on Monday night her last respect as she was buried according to Islamic rites on Tuesday at her husband residence in Matogbun. The residents that our correspondent interacted with were still shock with her death as they all claimed that they were confused because some of them claimed that they still saw her yesterday, others claimed they interacted with her, adding that nothing was wrong with her.

Another resident who don’t want her name in print said “I saw her yesterday (Monday) washing clothes in front of her shop. Nothing wrong with her till the even on Monday when she started complaining of stomachache and she was taken to a nearby hospital and when she was diagnosed, the doctor said he can’t find anything wrong in her system but if anyone touch her tommy she will shout but around 10 pm on Monday she kicked the bucket.”

After the burial, Islamic clerics in attendance offered prayers for her and also admonished the people to always have the fear of Allah at heart at all times.

Imam Ridwanlahi in his short sermon, admonished the people to stop crying, adding that crying is not the solution, instead they should rally round the deceased husband as well as her kids because this is a very tough time for them. 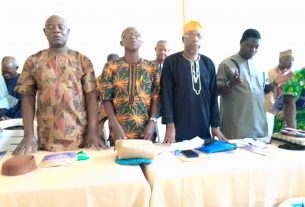