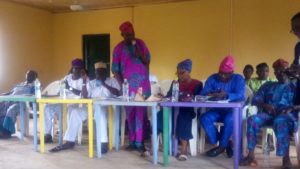 The Undertaking Manager of Ikeja Electric Distribution Company (IKEDC), Olambe, Engineer Bolarinwa Idowu has charged the residents of Maidan to pay the sum of three million, two hundred thousand naira (#3,200,000) on their bills in order to get a brand new transformer to replace the community transformer that was taken away by IKEDC since last December.

He stated this at the monthly statutory meeting of Matogbun Area CDC held on 1st of November, 2018 at The Community Hall, Matogbun.

“It is the procedure of IKEDC to ask people on any transformer that break down and taken to our workshop for repair to pay the sum of #3.2 million to procure another transformer. The accumulated debt on that transformer is twenty-six million naira but we ask the people to pay just #3.2 million in order to get them new transformer. I can assure that once you pay up to #3.2 million, a new 500KVA transformer will be install within two weeks.
Read also: Matogbun Area CDC statutory meeting

“I commend the people of Maidan for their turn up but their best is not yet enough. So far, people have paid one million seven hundred thousand (#1.7 million) on their bills and I urge those that have not pay to pay as soon as possible” he said.

The Area CDC chairman urged Bolarinwa to do whatever he can do within his capacity to ensure that the transformer is return as soon as possible, adding that today’s meeting suppose to take place in Maidan but they can’t hold it there because people are not happy as their transformer have not been return.

In the same vein, the Socialist Party of Nigeria (SPN) candidate, Comrade Hassan Taiwo Soweto also addressed the gathering to solicit their support in the forthcoming general elections. Soweto who is contesting as a member of Ogun State House of Assembly Ifo 2 constituency said “if I am elected, I will fight for the right of the people of the constituency. As the National Cordinator of an NGO known as Education Right Campaign, an organization that is meant to fight for the right of students and teachers for better funding and provision of facilitates, which is one of our cardinal programme will ensure that educational system receive appropriate funding and attention. As a legislature, with the power given to us by the constitution, we will ensure that public schools are provided across the length and breadth of the constituency.”

Deacon O. M. Olapade, while responding commended him for a well done job and urged him to contribute his quota to community development even before he get to office.

Otunba Olusanya, Patron, Matogbun Area CDC, Adiyan Alausa Area CDC as well as Araromi Oke Odo Area CDC commended him for his bravery and said there is a political movement called Oke Odo Political Movement and will like him to attend the meeting too.

Comrade Taiwo Olusegun, Ifo Zonal Youth Cordinator while addressing the gathering urged the youths to be attending community meetings. He said the community youths are working on a sensitization programme on voters education and urged Matogbun Area CDC youths to be part of the programme. He then explained the aims and objectives of National School Crime Prevention Corps, adding that the organization have government backing. 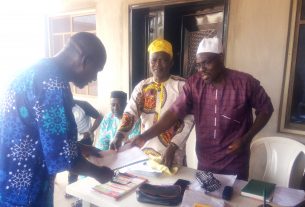