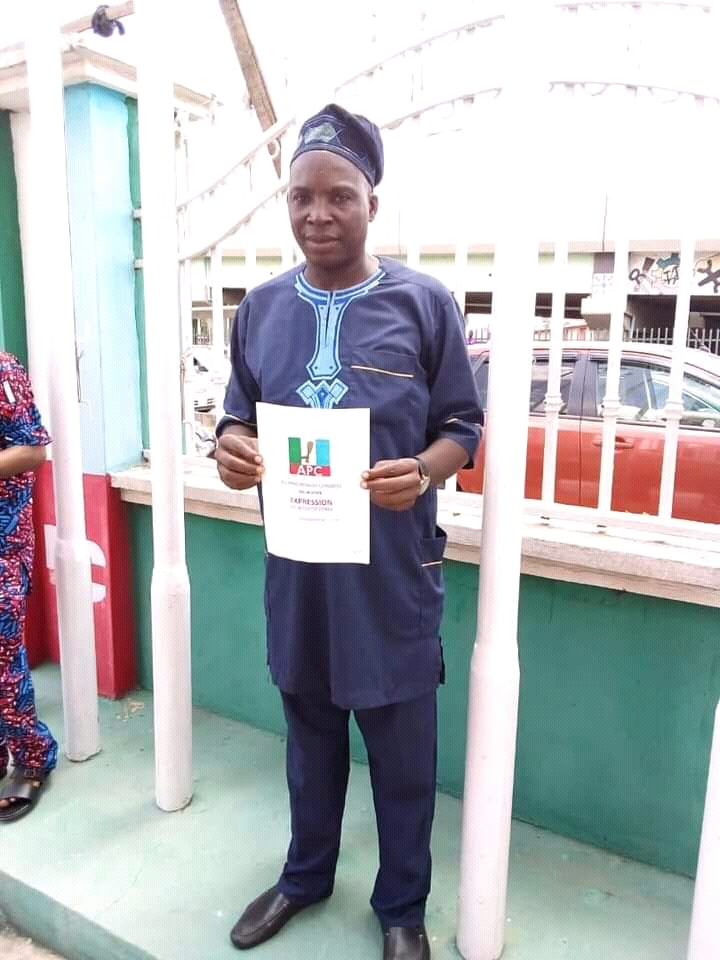 There is a serious disagreement and words of war going on among the ruling All Progressives Congress (APC) members in Ifo Local Government Area of Ogun State, particularly Oke Aro – Ibaragun Ward 7 as Hon. Semiu Amusa Bello popularly called Mandela emerged as the councillorship candidate of the party at the forthcoming local government elections.

A party stalwart know as Chief(Mrs.) Cecilia Jolaade Akintobi in a viral social media statement tagged “This government is an abnormal government” described the emergence of Mandela as undemocratic and an abuse of office.

She said; “If this abuse of office had happened in an advanced country the following people would have proudly resigned; Our dear Deputy Governor, Alhaja Noimot Salako, the Hon. Commissioner for women affairs, Hon. Oluwafunmilayo Efuwape, the Special Adviser to the Governor on women matters, Hon.Adijat Adeleye Oladapo and the party state woman leader.

“When the Deputy Governor to our Excellency, prince(Dr) Dapo Abiodun is a woman, we the women were so happy that a voice had been given to us. Our dear amiable governor in a meeting threw a challenge on the women to come out and aspire for political positions but we have some cabals under him he is yet to identify.

“Very meagre number came out. I am writing in respect of Ifo  local government. We have eleven wards and each ward must present a candidate for councilorship. In my ward, Oke Aro Ibaragun/Robiyan Ward 07, it was an open exercise as Mrs. Ololade Olubukola Okunola emerged and we proceeded to the local government screening committee organised by the Apex leaders of our local government.

“Finally, she made the list and all the Apex leaders made the list of all the wards candidates, appended their signatures on it yet a single person could rubbish the list all because he has access to the cabals and called them the government.

“We the leaders in my ward never relented, I was told to call on the commissioner for women affairs, she heard of this manipulation how Fola Salami removed the name of the only woman on the list and replaced it with his own candidate. The SA to the governor on women matters too heard of it, yet nothing positive came out of our beckoning on them. Where is their oath of office? Why are they representing us? Even the state woman leader pretended as if she wanted to do us good by announcing that all women who are aspiring should submit their CVs and the photocopies of their interest forms, it was all a wasted efforts.”

She however described the Transitional Chairman of Ifo Local Government, Hon. Fola Salami has perpetual contestant who have no respect for leaders in his local government. Her words: “Who is Fola Salami? A perpetual contestant who has never won since PDP. He does not and never respect leaders in his local government. Yet, when a caretaker committee was to be constituted, he was so smart by going round to apologise to them all and they took pity on him, made him the chairman, yet he lied he begged no one that the excellency DA ordered that he must be given. We have other leaders in ward 07, so why should he see himself as the only determinant of Ifo who becomes who in ward 07.

“If we have women in offices that are supposed to stand firm that nothing must happen to the name of the only woman on the list is a big shame on us. They have clearly told us they are not there for us but for themselves.

“This is a disgrace to the women in politics except we don’t know that what has happened to Lolade can still happen to any of us.

“I have just a consolation that there is a God who is the Almighty and His principles stands. He can never be bought or manipulated. Vengeance is mine and I shall take says the Lord in the bible.

‘Therefore, as many that connived to  do this evil by removing Mrs. Ololade Olubukola Okunola for Hamzat Semiu, can never escape God’s judgement. Even if they take their children abroad, tell me where God’s eyes can not reach. They have successfully destroyed their generation.

“Please, I want to appeal to all our fathers  and mothers  who are the conveners in their various local government to come together and let the governor be aware of the abnormal things happening under him.”

In a counter reaction, another party stalwart known as Asabi describe Cecilia as someone reaping from where she did not sow. Her statement read:

“She’s just a woman who worked against the aspiration of Hon. Isiaka Ibrahim in 2015. You worked tirelessly for Obadina and upon Easylife’s Emergence as House of Representatives, you were imposed on him to serve as his LA by Alhaji Tajudeen Bello.

“Let me take you a bit down memory lane. In 2018, October 2 to be precise, you stood against emergence of Dapo Abiodun/Fola Salami at Oke Aro field with your Political family during the party primaries to produce the Governor that was later cancelled.

“I’m reminding you of this so I can let you know why Fola Salami is important in Ifo. Please note should Hon. Isiaka be given 2nd term ticket by SIA, maybe you won’t be here.

“I also remember that the state House of Assembly ticket for Ifo 1 was collected from somebody and given to somebody. Madam no be today.

“Let me also remind you and make it known to Hon. Isiaka and those who care to know, that you, Madam Cecil chased Lolade out of your camp when she needed you most. You saw her as a rival who was getting some attention from Easylife through Easy youths and Easy babes, I accepted her and took her into our group and that was why she participated in the campaign process only for you to call her back when you saw that you were standing alone and promised to give her what you don’t have.

“Madam, the candidate picked by the party today, Hon. Semiu Bello consulted you several times even before Lolade, paid his dues to you but you want to be clever by half by playing the gender game.

However, in a letter to the Appeal Committee by the Transitional Chairman, Hon. Fola Salami dated 31st of May, 2021, he urged the committee to look into the arrangement that produce the earlier candidate (Mrs. Ololade Olubukola Okunola) saying his interest in selecting councillorship candidate in his ward should be considered just as its been done to other leaders across all wards in the Local Government.

“Please note that as the Transitional Chairman, Ifo local government and a leader in Oke Aro / Ibaragun Ward, which is my ward, I should have the privilege to choose the councillorship candidate in my ward as this is the standard practice, part of the letter reads.”